Read the full transcript of this Oxhey loft conversion and watch the full before and after video, at the end of the case study.

Why did you need a loft conversion?

There were two reasons I would say. One was the requirement that we wanted an en-suite master bedroom, which was impossible for any of the rooms that we already had. And there was another thing that we were expecting a baby, so we wanted that bit of extra space because we expect a lot of families to come over. So we decided that if you’re getting the house done once, then we should just get all of it done together.

Why did you want a loft conversion?

How did you find City Lofts London?

It was a stroke of luck because we were literally finding something for loft and that with Google, you know, loft conversions and City Loft came in with the tag. We found them there.

Why did you choose City Lofts London?

Breath of fresh air with City Lofts because you don’t expect the person coming in with a lot of preparation. We were very impressed with Deepak’s meticulous preparations. After the first visit they gave us the quotation with everything that we wanted in the house, so of all the people that we called into the house for the evaluation cost, I think City Lofts are the best people with the quotation and the preparation. With the breadth of the knowledge about the building and construction work, we were really impressed. Some of the things that we didn’t even know about, what we wanted to get done. We didn’t even know they existed in terms of the building regs and the party wall, so they took us through all the stages, one by one. It was a guided process but also completely project managed.

And I would add that Deepak, the day he came he knew already so much about the property and he had some photographs with him. So he knew exactly what he was getting into before coming into the property. That was the level of preparation on day one, before he had even met us and then when he came back with the quote, it was so professionally done. For me, that was very appealing, usually people would send you an e-mail quote saying removing wallpaper, X amount, or things like that which is just barely listed and I personally never feel comfortable because there’s so much wiggle room, at the end of the day if you rely on quotes like that. They will say, oh, I predicted this to be whatever. What City Loft had done was literally under each heading, described the level of work that was gonna be taken. And there was a booklet, like a memo, which we could just read through like a book and that level of detailing was just very impressive.

What obstacle did you have to overcome?

The planning permission, everything went smooth initially, but then the roadblock that we hit was with a party wall notice. It was all in the process, guided process. Party wall notices were there, it was served to our neighbor, to the party well neighbor, but she never signed and never got back to us on the party wall surveillance. So that was an initial hiccup, but then again, Deepak and we came to an arrangement, where we decided that if she doesn’t sign, we have given them enough notice. So we could carry on with the work anyway.

It was a calculated risk that we had to take and I would say one of the biggest factors for us to take that risk, was that we were confident that the way they would carry out the work, will probably not cause any issues for the neighbors to complain to us about. So we were feeling confident that even if we proceed without her consent, we complied with the requirements and that yeah, it should be all fine. That was the initial hiccup for us.

How involved were you in the design process?

For us, to be involved is understandable because it’s our house and everything. But we were very happy with the way Kuly was involved because he had all the numbers to the T, like, the measurements of the floor, for the flooring, the measurements of the bathroom units, how long should be the shower and sink and everything. He was constantly going back and forth to double check the numbers for us and he was there at all times. Right when we needed him, he was there.

What was it like working with City Lofts London?

This is the most impressive thing, for me, I think. They did the work right on time. People came in even before what they’d said in the morning and they left after what they’d said, so the work is really meticulous. They were very passionate for the work. Yeah, this was really a good thing. The project finished on time, so for me that was the ‘It’s unheard of’, any kind of project, it stretches. Of this kind, any project of this magnitude, the work that is involved, the planning, everything, it’s very very rare that you see the work completed on time. With City Lofts, I think they completed on time. With the baby, they promised us that before the baby, we’ll move in with Khalid’s promise. I think Kuly and his guys worked really hard to get us in the house before the baby, just a week before the baby was born.

This meant a lot to us to bring the baby to this home for the first time, straight from the hospital. And that was made possible, so we were very happy about that. And one more thing with the way these guys worked. Because we were living in a rented property away from here. We didn’t have much oversight on how things are being done during our day to day, so we would come back after a few days to all of the work. Our neighbors, when we ran into our neighbors, in one of those visits, they told us how nice these guys are. They were like,” you’re guys are golden”, ” You have really wonderful workers working for you”.

And to hear that from a neighbor, I think is one benchmark of a compliment. That tells you about the professionalism of a company. 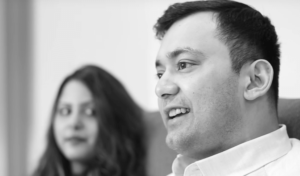